Two ways of obviating these developments is to use resources such as water and agricultural inputs more efficiently and increase the crop yields of key actors in global food production: smallholder farmers.

These concerns are what led the Dutch Ministry of Foreign Affairs to award a subsidy of 4.6 million euros through the Netherlands Space Office to a consortium of partners led by CTA to implement the Market-led, User-owned ICT4Ag Enabled Information Service (MUIIS). The project has ambitious goals: increase crop yield, farmers’ income, the use of agri-inputs and water, and trade and investment; and decrease the risk of using agri-inputs. The MUIIS Project: made to last

If the world continues on its course, then estimates suggest that by 2050 population growth will have dwarfed food production.

The partnership and business model behind MUIIS

ICT Update spoke to Ben Addom from CTA, who is the programme manager of the MUIIS project in Uganda, to find out more about the partnership and business model that he hopes will ultimately make this a standalone, sustainable project. 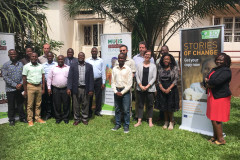 How the data revolution can benefit farmers by Chris Addison and Chipo Msengezi

A recent CTA workshop 'The value of farm data: Farmer-representing organisations and farmer-owned data' gained insights into the role these groups can play in using and delivering services to the smallholder farmer. 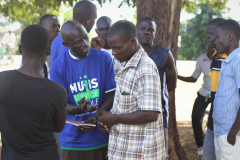 ICT Update spoke to Ruud Grim, senior advisor for applications and coordinator of Geodata for Agriculture and Water (G4AW) at the Netherlands Space Office, to find out more about the G4AW programme, which made the MUIIS consortium possible. 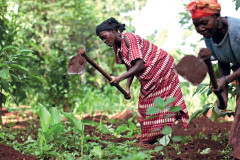 A new way to practice agriculture

Rather than treat a farm and crops as if every plant is the same, farmers can use precision agriculture to apply inputs only where and when they are needed. ICT Update spoke to Hanna Camp, client engagement manager at aWhere, to discover in more detail what the company's role is in the Market-led, User-owned ICT4Ag-enabled Information Service (MUIIS). ICT Update spoke to Remco Dost, senior project manager at eLEAF, about the company's work, what it does with the raw data it sources from satellites and what role it is playing in the Market-led, User-owned ICT4Ag-enabled Information Service (MUIIS). ICT Update spoke to Ronald Rwakigumba of Mercy Corps, who is responsible for the last mile of the Market-led, User-owned ICT4Ag-enabled Information Service. 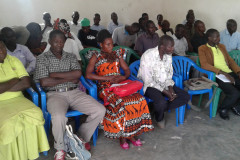 If the world continues on its course, then estimates suggest that by 2050 population growth will have dwarfed food production. This will put an untenable strain on resources such as land and water as we search for ways to feed nine billion people. This strain is likely to be further exacerbated by climate change. Unpredictable farming seasons and weather patterns are making life even more difficult for food producers.